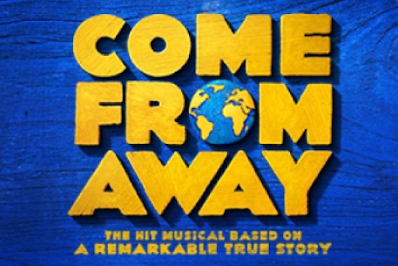 We came, we cried, we laughed and we remembered. For those of us in the opening night audience of San Diego’s home grown musical “Come From Away” who were alive and in tune with the comings and goings in 2011, specifically September 11th 2011, you will recall the horrors of terrorist’s attacks on the Twin Towers in New York and The Pentagon Complex in Arlington, Va. using airplanes as their weapons.

"Come From Away" premiered at The La Jolla Playhouse in 2015 and went on to Broadway where Director Chris Ashley won a Tony for Best Director of a Musical and the show itself, picked up four Olivers, five Outer Critics Circle Awards and three Drama Desk Awards.

The story a true one with Book, Music and Lyrics by Canadian husband and wife team Irene Sankoff and David Hein, is a story about healing as well friendship, and the true meaning of ‘Love Thy Neighbor’.

I remember being in Las Vegas at the time and the eeriest thing that came over me was the fact that there were no aircraft in the skies above. The FAA stopped all air traffic for several days. My friends and I were there for at least one extra day until we could get a rental car to drive home. (We were running out of money).38 international planes were diverted to Gander, Newfoundland because on that day all 225 aircraft coming into this country were rerouted to various airports in Canada.

All in all, according to some reports, the number of flights that landed in and around Canadian cities totaled 225 and 250 and the number of passengers between 30,000 and 45,000.

This operation of diversion was called ‘Operation Yellow Ribbon’. Of the 38 that descended on Gander, a small town with a population of about ten thousand, sixty-seven hundred passengers from about 100 different countries deplaned, nearly doubling the town’s population.

Undaunted by the overwhelming task of housing, feeding and offering solace, medicine, baby food, formula, blankets bedding and toiletries to the passengers, the good folks of Gander welcomed them, took them in, housed them, prepared meals, offered clean and warm clothes, listened to their stories, made makeshift hospitals for their animals and in effect, treated them as family.

One might ask, how does one tell this story on stage without sounding preachy, or maudlin? 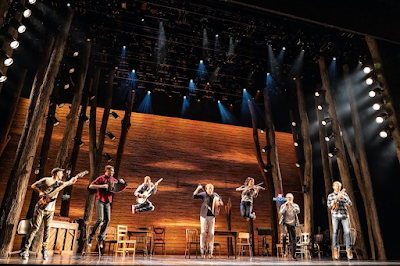 Let’s start with the terrific orchestra (Ian Eisendrath) off to the side, and on stage playing Celtic, Irish, folk and original tunes using some of the most unusually sounding and looking instruments I never knew existed: Irish Bouzouki, Uilleann Pipes, Ney, Boshran, Djembe, Cajon and Udu.  Kiana June Weber played a mean fiddle; she took the house down at the curtain call. No one wanted her to leave the stage.

Kelly Devine’s choreography is as simple as stomping feet and clapping, banging on tables in harmony to rousting tabletop dances to changing seating positions on the plane.

So, begins a life altering experience that unfolds seamlessly before our eyes. “You Are Here” and “Welcome to Newfoundland”:

Twelve actors take on the roles of both passenger or ‘plane people’ and locals and with a change of lighting (Howell Binkley), a hat, a sweater (Toni-Leslie James) and a re-formation of chairs we are either on the plane or in and around places in Gander. Ashley’s expertise direction, packs the 100 minute production into a powerful one-two punch that is still worth raving about. 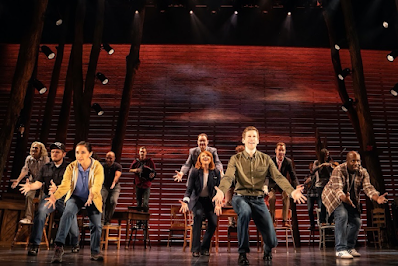 Every single one of the twelve multitalented actors in the touring show, sing dance, and can turn on accents from a multitude of countries: Canada, Europe, American (from various parts of the country) African and the list goes on.

Based on interviews at the 10th anniversary reunion both ‘plane people’ and townsfolk spoke with Sankoff and Hein about forty minutes at a stretch and excerpts from those interviews became the backbone for the story. Getting the talk, accents and rhythm down to a science gives it the look and sense of all involved the necessary homegrown feel for authenticity’ hence, “Come From Away”. 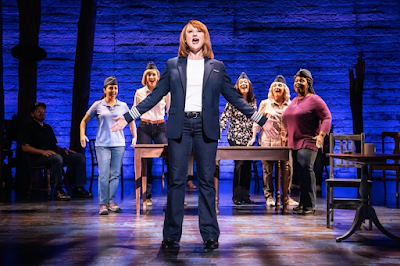 The Captain on record in “Come From Away is Beverly (Marika Aubrey) whose story of being the first Captain of American Airlines, mother and wife as well as first female pilot for American Airlines shows itself as her concerns for her passengers out -weigh her personal concern for the other pilots out there. Taking center stage more often than not and in her own narrative she explains it all in  “Me And The Sky”. It is one of the more than fifteen original musical numbers that serve as a backup to the story.

Standouts all, Nick (Chamblee Ferguson) is an oil engineer from England. He and Diane (Christine Toy Johnson) become sort of a thing. Bob (James Earl Jones, yes related to the James Earl Jones of theatre and Hollywood fame) a gay couple Kevin T. (Jeremy Woodward) and Kevin.J(Nick Duckart). Duckart also plays the Egyptian Chef who is the least trusted of the passengers because of his Middle Eastern background and Lana (Danielle K. Thomas) black mother of a firefighter back in N.Y., and her friend, contemporary and confidant Beulah Cooper (Julie Johnson) who walks in her steps every day; her son is also a firefighter. “I Am Here” and “Stop The World”. 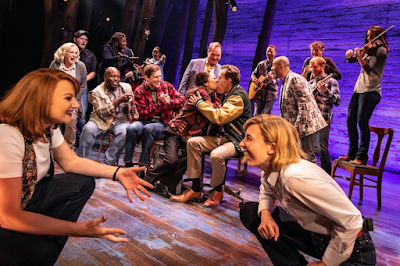 Set simply (Beowulf Boritt) on a wooden planked stage with horizontal slats forming the background (they open and close) an array of boxes that housed some of the animals, about six or seven life like looking trees stand firm, the same number of mix and match tables and chairs that are moved about to form everything from airplane seats to a cafeteria setting to a mountain cliff.

“Come From Away” is one of the most enlightening and uplifting original plays I can honestly say blew my mind and left me teary eyed, and for the cynic in me, optimistic.

Newfoundland is the only place outside the United States, where we share the steel from the World Trade Center.