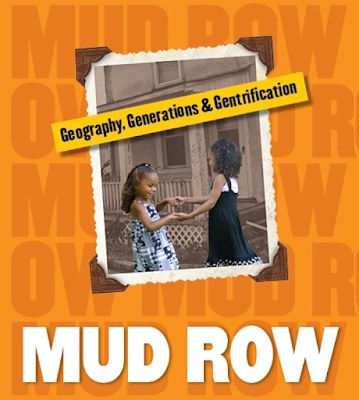 There was a time when families lived in the same house for generations. And, OH! If those walls could talk!

In an area in West Chester, Pennsylvania in a place called Mud Row, “The Coloreds bein’ the mud of the world…livin’ in mud like conditions…would naturally be in Mud Row”.

For three generations members the Geter family lived in that house and for better or worse, they had a roof over their heads, and memories they would like to erase. Each one would like to leave their shared history behind, but history has a way breaking down walls.

In Dominique Morisseau’s “Mud Row” now in an excellent and taught production under Delicia Turner Sonnenberg’s deft direction, the story of five women shifts seamlessly back and forth from the 60’s to 1981.

Back then, the civil rights movement was at its peak almost breaking point and Frances ( Joy Yvonne Jones) was right in the middle of it fighting for the right to be treated equally at the food counters and equal rights for all. Her sister Elsie or grandma Elsie (Andréa Agosto) cons her way into higher society circles by dating a’ fella’ “whose opening up a world for me”. Since life doesn’t always go as planned, her two grand- daughters, Regine and Toshi, are left with the spoils: the house on Mud Row.

Fast forward and Regine (Marti Gobel), who is accomplished, bright, and financially secure, just learned the deed to the Mud Row house is in her name and has always been since a child.  She and her husband Davin (Rondrell McCormick) pay a visit the house, which had been abandoned for the last five years. It’s dark, musty, appears to be empty, and oh, the plastic cover on the couch is still in place and a black and white TVsits in one corner.

They are waiting for an appraiser. The developers are circling their neighborhood and Regine can’t wait to get rid of the property and with it her ghosts of the past.  She suspects squatters are living in the house.

Toshi (Rachel Cognata) sees things in color. Now she is in her magenta mood, the color of anxiety. Toshi and her boyfriend Tyriek (Leo Ebanks) have moved from the streets to the Mud Row house. They have been squatting there for the last three months and realize someone has been in the house since they last left. Toshi is a recovering druggie.

For the last nine months she has been clean but when the sisters were growing up, Toshi made life hell for Regine. She stole money, credit cards and a favorite keepsake among other things. She and Tyriek are still stealing and scamming their way through life but will fight till the end to stay in the house.

When Regine and Davin come back the next day and they confront Toshi and Tyriek all hell breaks out. The you know what hits the fan and its game on between Toshi and Regine and on some level, Davin and Tyriek.

Family business isn’t always pretty and the ensuing clashes between Toshi and Regine rush out like the waters of Niagara Falls almost consuming them both. What lies ahead for the sisters and their significant others will be up to discussion yet Morisseau does offer an answer.

Playwright Morisseau beautifully fleshes out the characters, all excellent and completely authentic, to always wanting you to understand from whence she is coming. From the differing paths Frances and Elise take to the same paths Toshi and Regine take, one can’t help but compare the generations, past and present, and the influence the changing times from the ‘60’s to the 2018 it had/has on them in the house on Mud Row.

Scenic designer Brian Redfern’s multi layered set servers the purpose of the different generations of the house when relatively new to the present where it has fallen into disrepair. Caroline Andrew’s lighting design from sepias to shadows is excellent as well is the projections freezing moments in history, to Melanie Chen Cole’s sound from subtle background to squeaks in the floor boards and Regan A. McKay’s costumes all fit the bill both past and present.