“Herland” by Grace McLeod is making a rolling world premiere at Moxie Theatre through Feb. 17th. It will also be making the same world premiere at the Redtwist Theatre (Chicago) this year and the Greenway Arts Alliance /Greenway Court Theater (Los Angeles) McLeod is the youngest playwright at 23 ever to have this honor from the National New Play Network.

Oh, how we see the world through different lenses when we are 17 than when we are 70+. Playwright McLeod, a mere child by this octogenarian’s timeline, seems to have passed over  a world most seem to want to keep young with a series of drugs and injections, tummy tucks and breast augmentation and zeroed in  on a group of independently sound minded seniors who seem to be pretty comfortable with themselves and who want to hold the world with their own hands and in their own time.


While this homage to youth and a society that genuflects to it, to commercials and mailers urging seniors to move into ‘senior living housing where everything is provided for you’ and yadda, yadda, yadda (and to hell with that), McLeod’s “Herland” is a funny, touching and heartfelt essay on what three seniors want most, or think they want most, as they move forward with the next phase of their lives, in whatever time they have left.

Jean (Rhona Gold), Terry (Loie Gail) and Louise (Jill Drexler) have been friends since high school. They know more about each other than they remember about themselves. (I have a friend like that in LA who keeps reminding me about things we did…well).

Jean is exploring the idea of all of them living together in a retirement home designed by the three that will include all of their favorite things. When Louise shows Jean pictures of retirement homes and the amenities they have like a pool, Louise insists theirs must have a Jacuzzi.


The combination of the three is an ideal package with three senior actors, all on top of their game, and ready for the kill as each brings out the best in each other. The dialogue is sharp, efficient and more often than not spot on.

They never miss a beat even when they discuss Terry’s being a lesbian or her deceased husband (Match.com) or Natalie’s secret meeting with a perspective date Bacca (Meg Stoll Torn), or when Jean ‘does her best Bruce Springsteen impression” or when they all let it hang out in an la ‘sex, drugs and rock n’ roll dream sequence. (“Born To Run”)

The show opens in Jean’s garage (Julie Lorenz) at her small family bungalow in Holland Mi.; the same garage her X, Bob used as a recording studio of sorts where he and his friends paid homage to Bruce Springsteen.

Jean was never allowed in there except to bring beer and snacks. Now she is using it for her office (‘the house is too big. Too much space to lose everything”) and all of Bob’s ‘stuff is packed away or covered over with an assortment of other things and disguised as organized junk.

Now Jean is in the organizational stages of putting her idea on paper to eventually seeing it become a reality. She ‘hires’ a young recent high school graduate, Natalie, (Christine Cervas Nathanson) who is totally down with the idea of working or freelancing as an intern before entering her first year of college.

Eighteen -year old Natalie (dedicated, efficient and well organized) thinks Jean is cool and jumps right in after a brief introduction and an offer of Coors Beer or some other form of hard liquor.  She feels completely at home with all three when they all finally come together in the garage to get a plan together.

She also tries to keep them focused, but that takes a bit more concentration since her mind is elsewhere at times as well. While the ‘elders’ are trying to figure out what they want in the ‘utopian retirement community, (a nod to Charlotte Perkins Gilman’s 1915 utopian novel where she visions a world with only women) Natalie is coming to grips with her own sexuality.

Artistic director Jennifer Eve Thorn and her gang of three go back and forth with their kvetches, their gossip (Louise-or Geez Louise), their insecurities and shyness (Terry) and their off the wall comments about family (Jean) as reality sets in later on in the play that will change the dynamic leading to their worst reality.

Rhona Gold, absent from the stage for some time, is back in rare form as the ditzy Jean whose idea of using her house as a retirement home sets the play in motion. Gold, a seasoned actor for as long as I can remember has not lost her jovial awareness in this, a role especially up her alley. Welcome back!

Jill Drexler is a perfect Louise, the one time trinket store –owner and independent woman who owns her own home and has a credit card with her name on it.  She is sharp, funny relaxed and oh, so natural as she shoots out the one liner’s that but for a less seasoned actor might steer us into sit-com territory.

Loie Gail is more lay back and quietly observant but comes through for Natalie when all is said and done.

Miss Nathanson’s Natalie is mesmerizing as she steers the group through the many phases of their developing a project dear to them without getting in the way.

Her sense of timing and her sweet, knowing and comfortable comportment are impressive for such a young talent. For those questioning her familiar look, she is the face of Moxie’s Box Office and office manager. What a hidden talent.

Meg Stoll Tron’s Becca serves as the ground breaker into Natalie’s new and unexplored alternative world as the two struggle to find some comfort on Jean’s desk as the two try to make the best of their would be date.

The Moxie team with Julie Lorenz’s cluttered scenic design, Ashley Bietz’s lighting, Anastasia Puatova’s costume design and Lily Voon’s sound design (“Thunder Road”, “I’m On Fire”) round out an evening that was fun, funny and poignant; striking a familiar chord leaving yours truly convinced that it’s OK to be whatever you want to be, do whatever you want to do and say whatever you want to say when you grow up 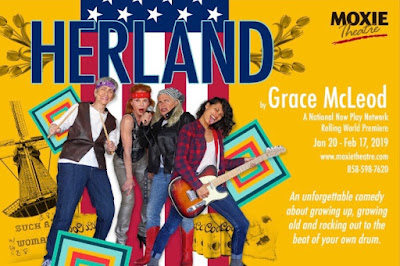